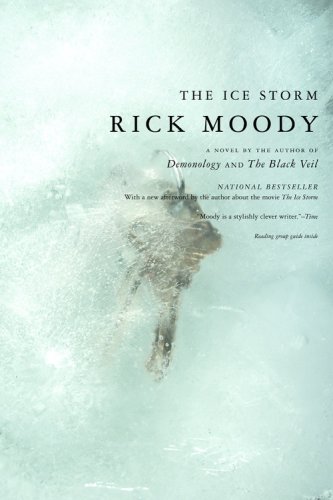 Right away in Rick Moody’s The Ice Storm, I get a sense of what the author thinks of New Canaan, Connecticut ­— the novel’s setting:  It is “the most congenial and superficially calm of suburbs.  In the wealthiest state in the Northeast.  In the most affluent country on earth.”  And he places us in time:  “Three years shy of that commercial madness, the bicentennial.”  Okay — 1973.  And the next paragraph is a long list of things that don’t yet exist in that time:  “No answering machines.  And no call waiting.  No Caller ID.  No compact disc recorders or laser disks or holography or cable television or MTV.”  The list goes on and on, but you get the picture — a very dramatic picture.  I remember 1973 quite well but this novel plunks me back in that time so vividly that I almost have to remind myself that over forty years have passed since then.  Moody does this in many ways throughout the book, but perhaps most effectively through his references to the music of the time — and not just the top ten pop songs but some of those songs that make me smile and think, wow, I forgot all about that one.  Helen Ready singing Delta Dawn, Cat Stevens singing anything.  Watch and listen to Delta Dawn here:

Turns out I’m close in age to the teenage protagonist, Paul Hood, who narrates this story of a disastrous ice storm which is the backdrop for his family’s implosion.  Of course his parents’ marriage has been rocky for some time — his father, Benjamin Hood is having an affair with a neighbor and his mother, Elena, cannot get enough self-help books to find her way out of a deep depression.  In the Midwest, in 1973, I didn’t know of anybody’s parents having “key parties” — where the men drop their car keys into a bowl as they walk in the door and at the end of the night, the women choose a set of keys randomly from that bowl.  Here is the man she will go home with, have sex with, no strings attached.  It might have happened.  In New Canaan, in 1973, we learn, key parties happen all the time.  And all this sexual promiscuity trickles down to the children — even the pre-teens are experimenting with alcohol and sex when they’re not playing with dolls, eating junk food and watching endless television.  Now that seemed very familiar to me.

Okay, the book is depressing.  No doubt about it.  But, too, it’s darkly funny.  It begins like this:  “So let me dish you this comedy about a family I knew when I was growing up.”  So,

you’re expecting humor but right away Moody hits you with other emotions:  nostalgia, embarrassment, fear of aging, desperation.   Anyone who has been through adolescence can relate to Paul Hood’s all-consuming crush on the most popular girl in school.  And in the early seventies, in the middle of the sexual revolution, we were all still trying to figure out how to deal with “free love” and wanting all relationships to be “relevant.”   It wasn’t the beginning of married couples having affairs, but it sure became a whole lot easier, after birth control became readily available and cheaper than it had been before.  The collective consciousness was open and searching.  Or so it seemed at the time.

The Hood family members are all searching too, trying to make sense of their comfortable suburban upper class lives.  They’re all pretty selfish, kind of hard to like — except for the voice of the teenage boy, Paul, Rick Moody’s voice, which catches everyone with their pants down.  Their individual self-absorption and petty concerns are magnified by the enormity of the ice storm, wreaking havoc and ultimately real disaster in their cushy neighborhood.  As Mother Nature is powerful enough to destroy life through major events, 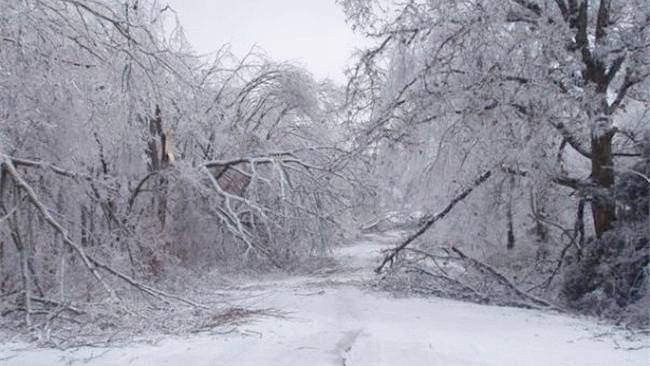 ice storms and hurricanes and mudslides, so too is our flawed human nature capable of destroying lives and relationships and families.  But, like the cleaning up and moving on that inevitably happens after natural disasters, human beings are resilient and can do the same.

In the Afterword to my edition of The Ice Storm is an essay by Rick Moody entitled: The Creature Lurches from the Lagoon:  More Notes on Adaptation, I discovered that this novel was made into a movie.  Of course, I couldn’t wait to see it and really enjoyed reading the authors thoughts about that process.  The thing that most interested me was that the film, by Ang Lee, has an original score.  What?  I wasn’t going to hear all those old seventies tunes?  But I trust the author when he says that the score, though it sounds kind of Eastern (lots of gamelan in it), it is mournful and for him brings up  “waves of regret about the past.”

So I watched it.  I recommend it.  But read the book first, especially if 1973 is stored in some of your own memory synapses.  But, be warned.  You may just be tempted to dust off some of your old vinyl.

I know Connecticut is beautiful — from the countryside to the shore.  I’ve seen it myself.  My online search for an independent bookstore here pulls me to the shore and specifically to Madison, Connecticut, home of R. J. Julia Booksellers.  Find them here:  http://www.rjjulia.com/  I fell in love with this bookstore as soon as I saw their website.  The masthead of the shop is a quaint rendering of the storefront in summer — all old-fashioned window panes, gas lamps and tables of books out front.  And their motto:  A Great Place to Meet Books — I love that!  I find myself clicking around to find out about the store’s history.  R. J. Julia has been around for over twenty years. The owner Roxanne Coady and her husband Kevin purchased an abandoned old brick building on the main street in Madison, Connecticut which, in an earlier life, was home to Nick’s Bar & Grill.  With the goal of moving permanently to Connecticut and turning the old building into a place where words matter, where writer meets reader, where the ambiance and selection and merchandising of books creates an atmosphere that is welcoming and presents the opportunity for discovery.  Nice.  And when I read this:  We are fiercely committed to putting the right book in the right hand, I give them a call.

The woman who picks up the phone is pleasant and courteous. I explain my project and she’s interested but asks if she can call me back since there’s is a line at the checkout.   I hear convivial murmuring in the background and imagine myself in that line.  Of course, I say, and give her my number.  When she calls back, I’m at the office and a little distracted.  Nevertheless, she’s excited about my project and quite clear about the books she’s recommending.  First, she mentions Wally Lamb’s I Know this Much Is True and I think about that but reject it because I tried and rejected an earlier novel of his a few years ago as too depressing.  I’ll probably give this acclaimed author another chance, but not right now.  Next, she mentions

Alice Hoffman and I perk up — I have read something by Hoffman and ask which one she’s recommending.  It’s called Skylight Confessions (haven’t read it)  it takes place right in Madison, Connecticut where R. J. Julia is located, and that sounds great to me.  Next, she recommends The Ice Storm by Rick Moody.  Another author I have not read but feel I should know, since this novel of his has also been made into a movie.  We agree that she will send those two along and we chat briefly about her community, Madison, which she

enthusiastically suggests I visit.  You’d love it!  She assures me and I believe her.  When I look at a map of Connecticut, I discover that Madison is right next to Guilford and realize that I must have passed very near to this place a few years ago when my brother and his new wife took us to the shore not too far from their house.  Funny how the longer I live, the more I feel like a character in a Russian novel — all those chance meetings and coincidences.

I find myself returning to R. J. Julia’s website frequently as I wait for my package of books to arrive — it’s filled with recommendations, lists of events (over 350 per year) and bios of the booksellers.  Now I’m sorry I didn’t ask the name of the person I spoke with.  Note to self — in the future, find out who you’re talking to!  The owner of the shop, Roxanne Coady, also writes a column, Dear Reader, and I find myself returning to that more than once because I like the tone of her writing and because it makes me feel a little more connected to this place which is almost three thousand miles from where I’m writing.  Now for the best part — unpack those books and get reading!