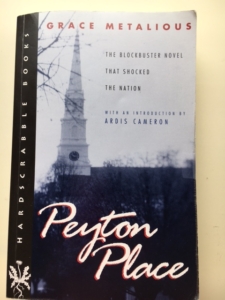 Peyton Place surprised me. What is now called an iconic novel of the mid-fifties, for me Peyton Place represented the first book I thought of as “dirty.” Like Valley of the Dolls, Peyton Place, by Grace Metalious, was one of those books that the moms in my neighborhood whispered about but seemed to all be reading. This must have been in the mid-sixties when Peyton Place, the TV series began its five year run. This notoriety reminds me of a current novel that seems to be in that same category: Fifty Shades of Grey, which I have not read but have heard so much about. After reading Peyton Place, however, I realized that I’d gotten it all wrong. This is not a smutty novel. It is simply a novel that shocked its early audience with its honesty. The subject of Peyton Place is not sex, though sex is underneath most of the main characters’ personal dilemmas,  the themes here include hypocrisy and secrecy, coming of age and a new way of looking at female sexuality.

The setting is a small town in New Hampshire where everything is tidy and all the residents keep up appearances. The plot follows the story of three female characters: a middle-aged woman, Constance MacKenzie, who worries that her secret, her daughter’s illegitimacy, will be discovered and ruin her life; the woman’s daughter, Allison, who believes her father is dead and aspires to be a writer who searches for truth, and another adolescent girl, Selena Cross, who suffers ongoing sexual abuse from her stepfather. The forward to the Fiftieth Anniversary edition explains that Metalious’ publisher insisted that the abuser in the novel be changed from father to stepfather. Incest was a topic that simply could not be written about in the mid-nineteen fifties. The author was angered by this change and said that it turned her book from “tragedy to trash.”

Peyton Place is also about class privilege. The abuse of Selena Cross is easily overlooked because she belongs to a family living in a shack, literally on the wrong side of the tracks. The town women are interested in Selena because she is beautiful and polite and has a good work ethic. Despite their class differences, Selena is a classmate and friend of Allison MacKenzie. Selena’s mother, Nellie, is the MacKenzie’s housekeeper. Eventually Selena works in Constance MacKenzie’s high-end dress shop.

The male characters in the book are mostly members of the good-ole boy network of movers and shakers who live on Chestnut Street:  Leslie Harrington, the owner of Cumberland Mills, a board member of the local bank, chairman of the Peyton Place school board and a very rich man; Seth Buswell, owner of the local newspaper The Peyton Place Times and Doc Swain, the town doctor who becomes important for intervening in Selena Cross’ life at two crucial turning points. The other group of male characters literally live on the wrong side of the tracks in shacks without running water and work in the lumber industry either cutting trees or, like Selena’s stepfather, Lucas Cross, working as carpenters. This lower class of men are stereotypically drunks and wife beaters. But the town, including the social workers, mostly turn a blind eye to what happens in their households because they possess the most highly-valued New England characteristic: they pay their bills.

As the plot unfolds, we wonder whether Seth Buswell and Doc Swain will succeed in instituting zoning laws which will help bring running water to the shacks, whether Allison MacKenzie will realize her dream of a writing career and whether Selena will escape from her abusive stepfather. We also wonder whether Constance MacKenzie will lighten up enough to engage in an open relationship with the stranger who comes to town, Tomas Makris, the “Greek feller from New York” who arrives in the Fall as the school’s new headmaster. Though Constance has had an illegitimate child she tells herself that “she had never been highly sexed. . . ” that her affair with Allison MacKenzie for whom she names their daughter,” was a thing born of loneliness. . . .Men were not necessary for they were unreliable at best and nothing but the creators of trouble.” As an outsider, Makris sees Peyton Place for what it is, a small town in which lived two kinds of people: “Those who manufactured and maintained tedious, expensive shells, and those who did not. Those who did, lived in constant terror lest the shells of their own making crack open to display the weakness that was underneath, and those who did not were either crushed or toughened.”  He is immediately attracted to Constance MacKenzie and some of the steamy scenes in the novel are between Tom and Constance.

The setting in small town New Hampshire is beautifully drawn. Nature surrounds the town and is a refuge for the

innocent Allison MacKenzie. She likes to walk out of town and hike up the hill where “the delights of childhood were all around her, and here on the hill she did not feel that she was peculiar and different from her contemporaries.”  From on top of the hill at Road’s End, Allison liked to look down at the town spread out below her. “She could see the belfry of the grade school, the church spires and the winding, blue road of the Connecticut River with the red brick mills, like growths, attached to one of its sides.”  Allison is happiest in the woods, “one of the few remaining stands of lumber in northern New England which had never been cut, for the town ended below Memorial Park and the terrain above had always been considered too rocky and uneven for development.”  . . .  She felt a deep sense of ownership toward the woods. She loved them and she had learned them well through every season of the year.  She knew where the first arbutus trailed in the spring, when there were still large patches of snow on the ground, and she knew the quiet, shady places where the violets made purple clusters after the snows had disappeared.” Allison is truly comfortable here. “She could move quietly through the woods with a gracefulness that she never possessed away from them . . . ” In the woods with Allison is where Peyton Place begins and where it ends. And while, as a young girl, Allison echoes the sentiment of her mother, certain she wants little to do with men, in the end a man comes looking for her.

Peyton Place surprised me not only because it isn’t a prurient novel packed with sex scenes, but also because it is quite nuanced and well-written. Early on, it’s clear that Metalious’ novel may have been shocking to its mid-fifties readers not only because it included some sensuality, but because from the very first sentence, it’s clear that women in this novel are sexual beings, just like men. In this way, Peyton Place was ahead of its time and might now be considered feminist in its views. The very first sentences titillate the reader with the idea of female sensuality: “Indian summer is like a woman. Ripe, hotly passionate, but fickle, she comes and goes as she pleases so that one is never sure whether she will come at all, nor for how long she will stay.”  Constance MacKenzie definitely has sexual passions but they have been repressed for so long that it takes Tomas Makris a long time to release them. Constance’s daughter Allison, however, knows early on that she longs for a career and that she won’t let men or sex get in the way of that. When her high school friend asks her if she plans to get married when she’s old, she replies, “No. I’m going to have affairs instead.”  After she gets a job writing in New York, however, she publishes a story in a major magazine about a young woman who, like her, aspires to be the boss in a publishing company but settles for marrying the boss instead. It is the mid-fifties after all.

I’m glad I read Peyton Place and I recommend it as a well-written novel with a solid plot. And, as a reflection of a particular time and place, Peyton Place is brilliant.