I’m a dog lover. That’s probably why I chose to read Pete Nelson’s book, I Thought You Were Dead as my second Massachusetts book. I loved The Art of Racing in the Rain by Seattle’s own rock star author Garth Stein, but had to wait a couple of years to read it since its publication date followed too closely after the death of my precious Golden Retriever, Maddy.

I loved the beginning of the book. The protagonist, Paul Gustavson, getting home late one night, fairly drunk, fumbling with his keys by the light of his front porch, as the snow falls heavily around him. His dog, Stella, greets him with “I thought you were dead!”  Paul explains that since dogs have no sense of permanence, Stella believes he’s dead whenever he’s not around. Okay, must get this off my chest early. If one believes this about dogs, one cannot also believe that dogs are as intelligent, philosophical and conversational as Stella proves to be throughout this book. I know it’s a nit-pick, but it bothered me from page one.

That said, the book is great.  At the outset, Paul is a mess. He drinks too much, his job—writing a series called, Nature for Morons— is not fulfilling, he’s been unlucky in love, and his father has just had a stroke. Could things possibly get worse?  Not really. But over the course of the novel, we get to know Paul and root for him as he works his way through a new (difficult and possibly doomed) relationship, struggles with  impotency, maneuvers through the family dynamics of dealing with aging parents and finally comes to terms with himself. I Thought You Were Dead is a coming of age sort of novel where the main character’s best friend, confessor and confidant, is a dog.

Paul and Stella have conversations about love, sex and impotency, drinking and stress. 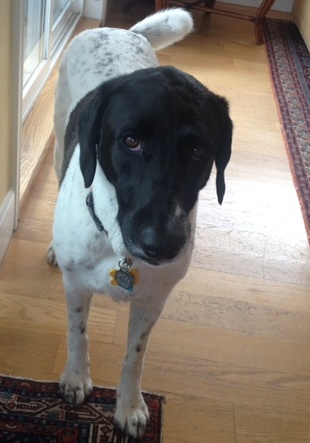 Their witty repartee had me laughing out loud. Like this conversation about drinking and impotency. Stella has just explained what everyone who has ever slept with a dog in their bedroom understands: she has been watching. From Stella’s point of view, here is Paul’s problem:  And what I’ve seen with my own two eyes, as a noninvolved observer, is first you get sad or stressed and then you don’t get a boner, or first you get happy, and then you do. And drinking makes you sad. That’s my observation. So Paul sets out to drink less and exercise more.

But the poignant parts of the story involve Paul trying to connect with his father after his stroke. Paul’s job is to communicate with his father through computer chatting because Paul lives in Northampton, Massachusetts and the rest of his family is in Minnesota. His father can hit a yes or no key on the keyboard so Paul’s sessions with his dad become like therapy — Paul does the talking and his father can only agree or disagree. Through these intimate sessions, we get inside Paul’s head and learn his deepest thoughts.  We discover how confused and frightened they both are at these different stages of life:  Paul, at the thought of losing his father and the grim trajectory of his personal life, and Paul’s father, at the thought of losing his memory and control of himself.

I Thought You Were Dead is a very good read. The writing is sharp and intelligent, sometimes funny and often moving. The themes here are universal, and exploring them through Stella’s eyes is a bonus.

What about the sense of Massachusetts that comes through the narrative? Well, it seems this story could take place in just about Anywhere, USA. However, when Paul first takes up running, we get a very thorough feel for Northampton as he runs down Main Street past a furniture store, a high-end clothing shop, a lingerie shop, a diner, several used book stores, importers of third-world knickknacks, a dozen ice cream parlors “dairy being the last vice the local Birkenstockers allowed themselves,” He passed a laundromat, the “Healing Cooperative” complete with homeopathic remedies and “a pamphlet rack by the door offering flyers for all the various local shamans and magical practitioners and caregivers.” Typically, he tells us, he would run past “petitioners getting signatures . . . girls’ soccer teams collecting donations, and New Age people offering incense or poetry, and disturbed zanies  . . .  Main Street was generally alive, seven  days a week and year-round with trust fund mendicants, panhandlers and mooches, crow babies and white Rasta kids in Jamaican black, yellow, green, and red knit caps, Goth waifs and death punks who asked for spare change to make ‘phone calls,’ and one-time, a kid squatting on the sidewalk with a sign that read, PARENTS SLAIN BY NINJAS — NEED MONEY FOR KUNG FU LESSONS!”

Now I get the picture. Here’s a fairly typical New England college town—

though Northampton’s website would beg to differ. There, the town’s mayor describes Northampton as a slice of paradise. And it looks lovely to me—the Connecticut River on one side and Mt. Holyoke on the other, home of Smith College, former home of Amelia Earhart, Calvin Coolidge and Sylvia Plath, among others.  I’d love to visit.