Christopher Castellani wins!  Okay, this blog isn’t meant to be a beauty contest for writers. That said, Castellani is my pick for Mr. Delaware.  Castellani has written a trilogy about an Italian Immigrant family, the Grassos, which begins and ends in St. Cecelia, a small village in Italy where the novel’s main characters, Maddalena and Antonio, meet and marry.

Because I believe that his latest book takes place in Italy and I’m looking to discover what life is like in Delaware, I begin reading the trilogy in the middle with The Saint of Lost Things.  In this novel, set in the fifties in Wilmington, the Grassos are just starting out, searching for their American 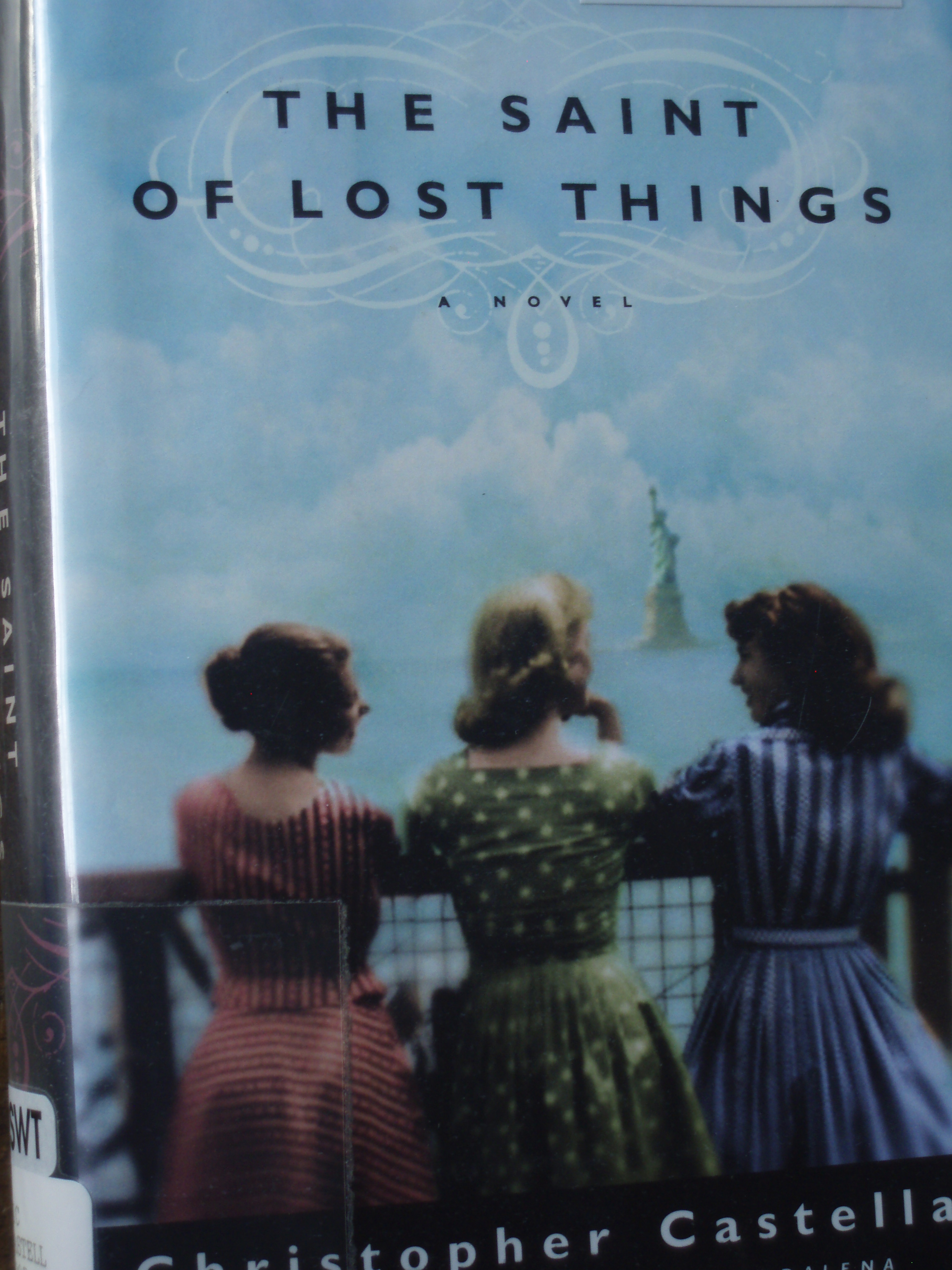 Dream.  Antonio works on an assembly line at the Ford Motor Company while Maddalena rides the bus to a factory in Philadelphia where she bends over a sewing machine all day.  Any extra money they make gets sewn into a special pocket Maddalena has fashioned into the cornice of the drapes.  The Grassos live with Antonio’s family in the Italian neighborhood in Wilmington, a tight-knit community, ten square blocks with the Catholic church, St. Anthony’s, at the center.  The church, the houses of other families and Italian restaurants are all places where they gather on Sundays and for every important family event.  For Christmas Eve festivities, the women begin preparing food a week in advance, they make twelve pounds of pasta and seven different kinds of fish, delicate sauces and sweets galore.  These gatherings are filled with the kind of big emotions that come with big families – passion, jealousy and love, so much love.

While Castellani peoples his novel with lost souls, characters who long for past loves, past lives, new relationships and who dream of things apparently out of reach, there is also much joy.  Maddalena desperately misses her family back in Italy, she thinks about the man she might have married, and envies all women with babies since she has not been blessed with a child after several years of marriage.   Antonio has too many dreams.   He says:  I want us to have it all.  For Antonio all means owning a restaurant and a shiny Cadillac, a house in the suburb of New Castle and three kids at play in their yard.  And there’s Giulio Fabbri who lives down the street from the Grassos.  After Giulio parents die, even in his forties, he finds it impossible to live without them.  As Giulio and  Maddalena’s become friends, Giulio begins to open up, to sing and play music again.  Finally he can find comfort in the memory of his parents and hope that he may find a new kind of life with a new kind of family.  Love is life!  Life is love! Maddalena tells him.

Love and especially family love is at the center of this novel.  At the end, the extended Grasso family is gathered for a picnic on the beach.  Maddalena happily watches their daughter, Prima, playing with Antonio on the beach.  They still have dreams.   But they have realized the most important ones.  They have love and they have family. 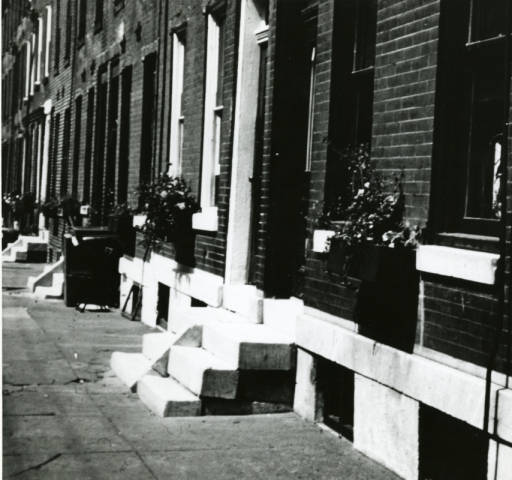 And, throughout the novel, I’m pleased to discover that I get a real sense of Wilmington, Delaware as a place, at least as it was in the 1950’s.  Antonio calls Wilmington a half city.  For him Philadelphia is a real city, New York the city.  Rome, Milano and Genoa, those are dead cities and Italy the land of dead cities.  For Maddalena, Wilmington is enough.  She imagines the rest of the city does not differ much from the six blocks of her immediate neighborhood that she knows well:  long brick buildings on both sides of the street, each divided in tiny row homes with while wooden columns and concrete stoops.  Dormers peek up from the roofs of the nicer houses.  The view from Union Street to the church is one of unbroken line of red brick.  If she wants to see a stone house, Antonio must drive her to Rockford Park, where a wealthy American family has constructed a mansion with a terra-cotta roof.

Wilmington, the Italian neighborhood particularly, also has petty criminals, friends of Antonio’s whom he meets at Renata’s Pizzeria most nights to play cards and drink whiskey, and has bred the kind of racism common in the fifties.  When a black family moves into in the neighborhood, a group of Antonio’s acquaintances wage a campaign of harassment and property damage to force them to leave.  They do not leave, but they do suffer the loss of their son under disturbing circumstances.

Sometimes Antonio and Maddalena drive out of their neighborhood to Old Money Town, 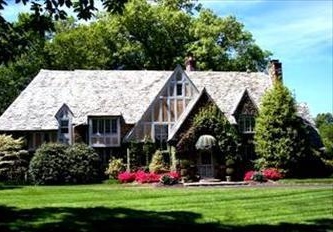 as Antonio calls it.  In Westover Hills, they pass mansions with their stately pillars and round front windows that showcased enormous gold chandeliers.  Then they loop back around to a new housing development called New Castle, where people with seventeen thousand dollars of new money could buy a two-bedroom home of fifteen hundred square feet.  The streets were wide and quiet . . . with strips of mown grass between the sidewalk and the curb.  They like to point out which of the houses they prefer among the many that look alike – a brick front, white wood shingles on the sides, black shutters – bujt every so often they’d come upon a bay window or a hip roof or a double door.  The important thing is that, once they move to the suburbs:  Nothing about their house would announce, ‘We’re immigrants!’ except the aroma of garlic and basil floating from the kitchen window. 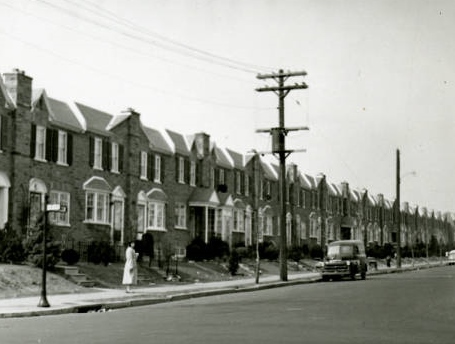 When Maddalena rides the bus home from her job in the textile factor in Philadelphia across the border, she finds it different in not one single way from the state of Pennsylvania.  The same little brick houses, squat and square, divided by chain link fences, go on for miles. . . . If someone had not put up the sign WELCOME TO DELAWARE, nobody would notice a change.   She contrasts this with Italy where, she says, every town has its own distinct face.”

Immersed in the world of this novel, in the Italian immigrant neighborhood of Wilmington, 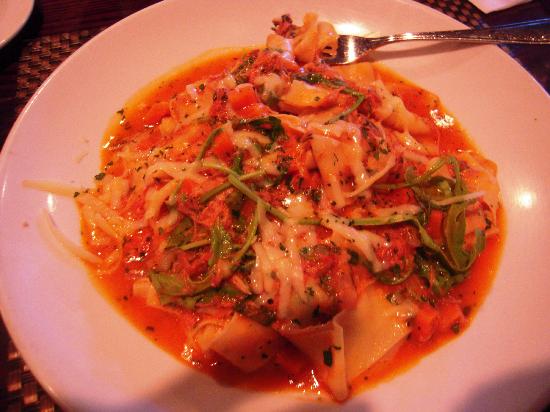 I feel like I’ve got a sense of what makes this place unique.  I want to explore Little Italy, as the Grasso’s neighborhood is now officially known, I want to drive through the Brandywine Parkway and past the mansions of Westover Hills and visit the famous Hotel DuPont.  But before I head on down the road to Pennsylvania in my literary road trip, I find that I must read more of Castellani’s family trilogy.  I’ve ordered up the latest, All This Talk of Love, and can’t wait to see what

the Grasso’s are up to now.

I know, I know, I may never get through all of the United States if I have to read several books from each one.  And yet, now that I’ve discovered this great writer, how can I stop?