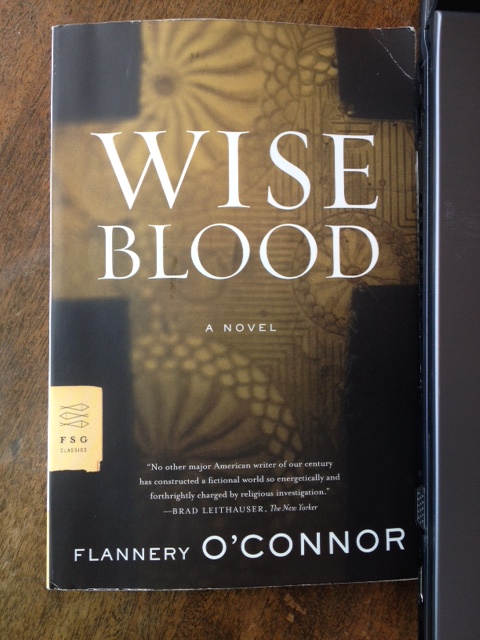 Wise Blood by Flannery O’Conner is a strange book.  In the Author’s Note to the Second Edition, she describes it as a comic novel dealing with matters of life and death, wherein protagonist, Hazel Motes, struggles with his faith in Jesus “like a monkey swinging back and forth in his brain.”   I found little comic in the novel.

At the outset, Hazel is on a train going to “the city” later identified as Eastrod, Tennessee.  He’s wearing a brand-new suit which is a “glaring” blue and still has the $11.95 price tag stapled to the sleeve.  His hat, noticed by everyone he meets, looks like a “preacher’s hat.”  Haze has nowhere to go after serving in the army for four years and losing his family one by one.  He is preoccupied by the deaths of his younger brothers and his mother, especially wondering where they go as their coffins are closed over them.  He says he wanted to put his elbow into his mother’s coffin to keep it from closing her into the darkness.  Everyone he meets seems to be attracted to his eyes, trying to see into their impenetrable depths.  Like his name, which reflects the protagonist’s state of mind, there’s a lot of imagery around “seeing” in this novel.  And, while everyone takes Hazel for a preacher, he insists that he is not now, and never will be, a preacher.  Methinks he doth protest too much.

When Hazel reaches his destination, he decides to prove that he’s a sinner by visiting a prostitute and then proclaiming himself a preacher for The Church Without Christ.  Much of the action of the novel takes place between Hazel and a simple young man, Enoch Emery who follows him around and tries to befriend him “because there’s nothing worse than having no friend in the world.”  I think that many scenes involving Enoch and his wanderings around the zoo and his fascination with a mummy encased in glass in a museum there are meant to be comic.  But for me, the portrayal of this simple, uneducated man is less funny and more pitiful.  When Enoch hears someone preach about “a new Jesus” he decides that the mummy is this new Jesus so he steals the mummy and gives it to Hazel.

Try as he might to avoid the role of preacher, Hazel cannot stop himself from

preaching or from thinking about Jesus. This is not surprising since the bible is the only book he’s ever read, and “when he did he wore his mother’s glasses” which tired his eyes.  Nor can Haze avoid the scammers who try to hook up with him to make a buck — a charlatan who shows up while Hazel is preaching and makes fifteen dollars and some change for his trouble; another preacher who pretends to be blind and his bizarre daughter who decides she wants to marry Hazel.  But Haze becomes more and more tormented and deeply withdrawn.  In desperation, he blinds himself with a bucket of lye, then wears barbed wire under his shirt to add to his suffering and stays mostly in his room.  When his landlady, who has been caring for him, suggests that they get married, Hazel runs out into the icy rain with his cane wearing his now threadbare suit, preacher’s hat and shoes lined with broken glass and rocks.  The next day he’s found unconscious in a ditch by two policemen who take him back to his landlady to pay his rent even though Hazel tells them, “I want to go on where I’m going.”  Hazel dies in the back of the squad car but no one realizes he’s dead.  His landlady remarks that she “has never seen his face more composed.”  The more she looks into it, the more she sees him “moving farther and farther away, farther and farther into the darkness until he was the pin point of light.”  Whew.  I close the book and am glad it’s over.

Okay, I know Flannery O’Conner is considered one of the greatest American writers of the twentieth century.  And I’ve read some terrific short stories she’s written, but Wise Blood leaves me cold.  There, I wrote it out loud!  It’s always hard for me to admit that I don’t like a novel which is considered by literary critics to be genius — it makes me feel ignorant.  That said, I now understand why O’Connor only wrote two novels.  The long form is not her strength.  Or, more likely, it’s just me.  I’m not interested in reading about the quest for religious belief.  But that’s not entirely true.  I’m simply not interested in reading about that quest when it involves an absurd and twisted set of characters, self-mutilation and martyrdom.

What have I learned about Georgia as a place through reading Wise Blood?  Sadly, not much.  I imagine that in the Bible Belt during O’Connor’s time there were plenty of circuit riding preachers – fake ones as well as true believers, and maybe some individuals who, like Hazel Motes, had been taught to read and write “but that it was wiser not to.”  And I know that O’Connor was interested in faith — Catholicism v. Fundamentalism particularly, and, while this story sets forth one side of that equation, it feels mean-spirited to me.  Flannery O’Connor once said: “Anything that comes out of the South is going to be called grotesque by the northern reader, unless it is grotesque, in which case it is going to be called realistic.”  (Mystery & Manners:  Occasional Prose by Flannery O’Connor.)  I know the characters in Wise Blood are not meant to be realistic — they just might be too grotesque to speak to this Yankee.