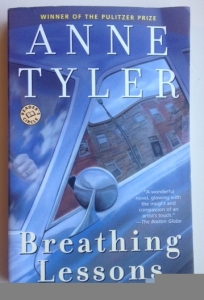 How does Anne Tyler do it? How does she create these wonderfully quirky characters who say and do cringe-worthy things in their daily lives yet share qualities that strike uncomfortably resonant chords in her readers? In Breathing Lessons, we meet Maggie and Ira Moran, a long-married couple who, as the novel opens, are on their way to the funeral of Maggie’s best friend’s husband. The action of the novel takes place in one day and much of it on their road trip from Baltimore to Deer Lick, Pennsylvania. Of course, I had to Google “Deer Lick” to see if it really exists. It does. It’s just southwest of Pittsburg and more than a three-hour drive from Baltimore, an interminably long time to be stuck in the car with these two characters. Maggie is a busy-body. But she is also good-natured – the kind of person who strikes up conversations with strangers and then divulges the most personal information. While stopped at a convenience store along the road, Maggie tells the clerk her family troubles: her son can’t keep a steady job, has once been arrested, pretends to be a rock star and is divorced with a young daughter. In fact, Maggie is certain she has heard her ex-daughter-in-law, Fiona, on a talk show this very morning as she was driving their car out of the auto shop. She’s so surprised to her Fiona’s voice that she slams straight into a truck. Here is another of Maggie’s characteristics: She’s accident prone. And Maggie takes the notion of “wishful thinking” to a whole new level. While she doesn’t exactly lie to her friends and loved ones, she habitually tells what Mark Twain would call “stretchers.” She frequently creates elaborate scenarios in her head in which she can change things, to make them better, with little regard for the real impact on other people’s lives. The most audacious example of Maggie’s “meddling” here is her plan to stop in on her ex-daughter-in-law and granddaughter and convince them to drive back to Baltimore with her and Ira — a thinly-veiled attempt to get Fiona and Leroy back together with the Morans’ immature and irresponsible son. We also learn, through Maggie’s conversation with the stranger at the diner, that their daughter, Daisy is leaving for college the next morning with a full scholarship to an Ivy League school. The girl has become “unrecognizable” to Maggie who, with tears in her eyes, tells the clerk that Daisy recently asked her this chilling question: “Mom? Was there a certain conscious point in your life when you decided to settle for being ordinary?” Ouch. Later Ira suggests that Maggie’s hare-brained idea to stop bring Fiona and Leroy home with them is her way of replacing Daisy with Leroy. Maggie wants an opportunity to start anew with her granddaughter, to do things right this time. This, it seems to me is what Anne Tyler is examining in this novel – the wish we all have to turn back the clock, to get one more chance to dosomething better the next time around. That said, there are some lovely moments between Maggie and Ira, moments which only happen between long-married couples who have known and loved each other for many years.  And while Maggie has, no doubt, settled for being “ordinary,” Anne Tyler reminds us that, in the final analysis, it’s what we all have in common.

Breathing Lessons is a beautifully written novel which highlights poignant moments in a couple’s ordinary life. Though sometimes painful and close to home, there were also times when Maggie’s reflections had me laughing out loud. And for me, looking for a sense of the State of Maryland in this novel, I got a great feel for the countryside on the road between Maryland and Pennsylvania. I particularly liked this description of driving out of Baltimore: The scenery grew choppy. Stretches of playgrounds and cemeteries were broken suddenly by clumps of small business – liquor stores pizza parlors, dark little bars and taverns dwarfed by the giant dish antennas on their roofs. Then another playground would open out. And once they cross into Pennsylvania: They entered Pennsylvania and the road grew smooth for a few hundred yards, like a good intention, before settling back to the same old scabby, stippled surface. The views were long and curved and green – a small child’s drawing of farm country. Distinct black cows grazed on the hillsides.

And when they return to Maryland after their adventure: They were in Maryland now, and Maggie imagined that the country here looked different —more luxurious. The hillsides emptied of livestock, had turned a deep, perfect green, and in the faded light the long white fences gave off a moony glimmer. Yes, I have a sense of Maggie Moran’s world now, both the physical landscape and the emotional turmoil inherent in any ordinary, long-lived life, beginning with youthful hope, taking the bumps and disappointments as they come but never losing sight of the possibility for positive change, and maybe a little well-intended meddling.