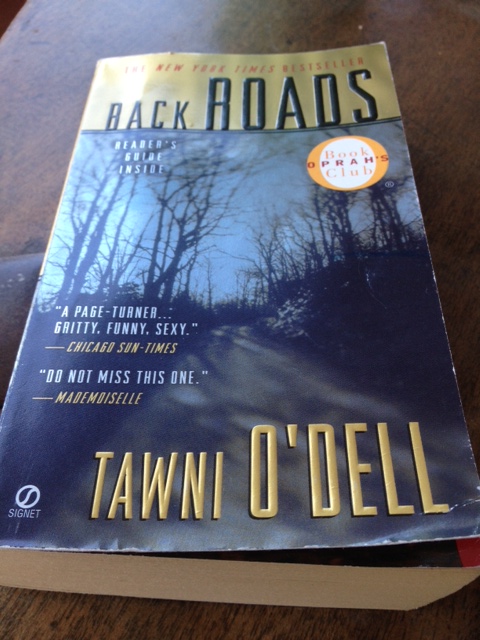 Back Roads by Tawni O’Dell is the story of a twenty- year-old young man, Harley Altmyer, who, on page one, is questioned by the local sheriff for the brutal murder of a woman.  From the looks of it, Harley is plenty guilty.  His hands are full of dried blood, the color of a dead rose and, while he claims innocence, he can’t stop talking about how the mining office where he and the dead woman were found is a favorite hideout of his, where he liked to come with his friend Skip, now off at college.  Harley rambles on about how he and Skip used to try to kill Skip’s little brother, but not seriously.  The only time they actually came close to hurting Donny by luring him to sit directly underneath the automatic garage door while they press the button to lower it, Harley pulled him to safety at the last minute.  Harley somehow naively believes that these stories he can’t seem to shut up about may help convince the sheriffs questioning him that he is not a murderer.

And Harley is no stranger to trouble.  He knows the sheriff because he’s the same man who investigated his father’s murder, when his father was shot in the back by his mother two years before the novel opens.  Wow, this is some dysfunctional family.  Since his mother has been in prison, Harley has been working two jobs, delivering appliances by day and working at the local grocery store at night to support his three sisters, ranging in age from eight to sixteen.  And he’s not happy about it.  Harley is consumed with rage over his situation.  He can barely keep his anger in check while going through the motions of caring for his sisters.  While he sometimes keeps his regular appointment with the court-appointed psychologist, he’s very careful about what he tells her about his feelings.  He can tell when she has tricked him into saying something important because she gives him a look, like I was suddenly naked and surprisingly well-hung.  Yes, Harley is angry and in trouble, but funny too.  I am completely on his side from page one. END_OF_DOCUMENT_TOKEN_TO_BE_REPLACED