I’m kind of reluctant to leave Pennsylvania, the rolling hills and beautiful, though coal mining damaged countryside to head off to New Jersey.  New Jersey?  Yeah, I have all sorts of preconceived notions about New Jersey even though I’m most familiar with the airport, having flown to New York via New Jersey from Seattle several times over the years — there’s a nonstop.  New Jersey immediately conjures up images of mobsters, a notorious Mafia hang out. No surprise that The Sopranos was set in New Jersey.  Also, Jersey Shore and Real Housewives of New Jersey, right?  But I haven’t watched those so that’s no help.  I also know that Martha Stewart went to High School in Nutley, New Jersey, thanks to my good friend Robin who went there too — though years later than Martha so their paths never crossed.  Of course, these random facts don’t really give me a handle on what it would be like to live in New Jersey or what it’s like as a place.

My research into independent bookstores in New Jersey leads me to Watchung Booksellers in Montclair, New Jersey.  I’m drawn to Watchung because the bookstore’s website tells me that Montclair is “a town that really values the word,” and the store owner’s comment

that she estimates sixty authors live there. Perfect.  Someone at Watchung will definitely be able to recommend a New Jersey novel for me.  I call them up and speak with someone who seems perplexed by my request — a novel that takes place in New Jersey, one that would give me a sense of New Jersey as a distinct place.  Philip Roth is the first author who pops into her head but she asks if she can call me back, wants to think about it.  I’m good with that.  In fact, I figure she’s really taking me seriously.  When she calls me back, she’s come up with  a book called something like “Legends of New Jersey” which doesn’t appeal to me — mostly because it’s not a novel.  She then suggests that I do an internet search to find a book I might like.  “That’s what I would do,” she tells me.  Now I’m disappointed because I’m really counting on the expertise of independent booksellers to make recommendations for this project.  So I decide to get American Pastoral by Philip Roth and then take her advice and do some online research about a more current author who has written about New Jersey.

My search leads to me an essay by Bill Morris in an online literary magazine called, The Millions, titled, “Who Wrote the Great New Jersey Novel?”  Find it here:  http://www.themillions.com/2012/07/who-wrote-the-great-new-jersey-novel.html   In

it, Morris says, “New Jersey’s lack of defining character traits —  it’s facelessness, its rootlessness, its lukewarmness —  make it an ideal portal to get inside the soul of a nation that becomes more faceless, rootless and generic — more soulless — by the day. . . . In contemporary America, anomie is a moveable feast, and its template was exported from New Jersey.”  Oh, he’s wonderfully cynical and I can’t wait to read his list of nominees for the great New Jersey novel.  But first, he asks, “what, beyond a New Jersey setting, makes a novel a New Jersey Novel?  He then quotes several writers on this subject.  Michael Aaron Rockland, a professor at Rutgers who teaches a class in “Jerseyana” (really?) says that the whole notion of New Jersey is that “we live in a never-never land, where we pretend we’re living on a farm.  The real centers of New Jersey are these office parks in the middle of nowhere.. . . what every writer writes about is our trying to find a center in our lives.”  Another author who grew up in New Jersey says, ” New Jerseyness is a kind of vagueness.  It’s peculiarly indeterminate.”  And this makes me think about my interaction with the bookseller at Watchung.  She seemed unable to recommend a book that exemplifies New Jersey, maybe because it’s so hard to put your finger on this place.  It’s fuzzy, mercurial.  Is it a suburb of Manhattan or a distinct place with character all its own? 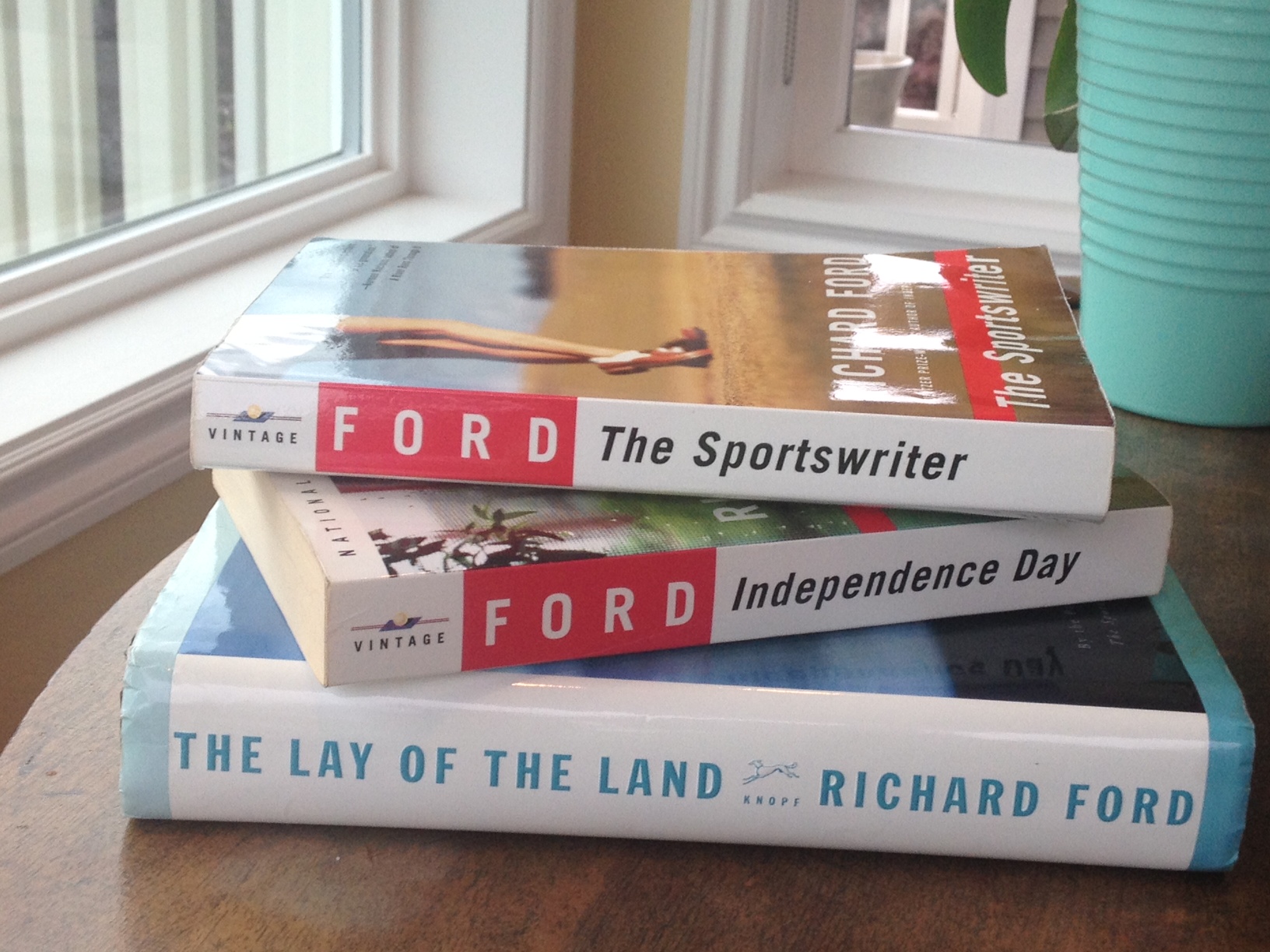 read many of them but have somehow missed that they were set in New Jersey.  Well, that’s not exactly true.  I love Richard Ford and eagerly read my way through the Frank Bascombe trilogy, one after the other and loved them all.  But I agree with Morris, who says the thing about these novels is that they’re all about what goes on inside Frank’s head.  Since Frank is a failed novelist who turns to sportswriting and then to selling real estate, he, like his home state is the “poster boy for the uncelebrated.”  He offers this quote from Frank as one of the most left-handed compliments any state ever received:  “Better to come to earth in New Jersey than not to come at all.”

Philip Roth is on the list, American Pastoral, specifically.  So I decide to start my New Jersey reading here and also order up Morris’s favorite Jersey novel, Jernigan, by David Gates from Watchung Booksellers, as my second source since I’ve found that reading two novels set in a state gives me the sense of continuity and departure that I need to form a deeper understanding of the place.